The freaks come out at night… 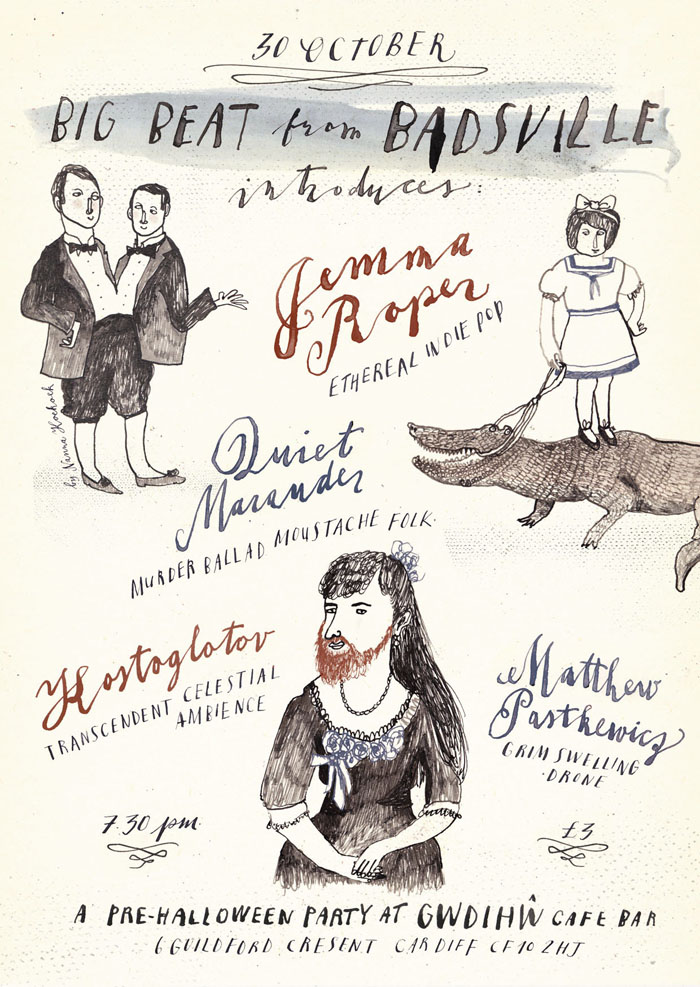 On the eve of Halloween my friend Matt is putting on this show at Gwdihw in Cardiff, which will be an “eclectic mix of freaks, fuck-ups and disconcerting sounds”. And I drew some ‘eccentrics‘ to help him promote it! On the bill that evening the following misfits:

Jemma Roper – “a spoonful of Bowie, two measures Kate Bush, mixed in a tumbler of classic psych”. Get a glimpse of what she has in store for you by watching this video by the genius Casey Raymond.

Quiet Marauder – “Unpredictable, Dadaist anti-folk” by a band, formed in March 2012, with the “prime intention to ‘bang utensils’. Within 5 months of collaborating, the band were left with over 200 songs”. Listen to their hit I Want A Moustache, Dammit.

Kostoglotov– “The perfect sonic landscape to accompany a dystopian nightmare, Kostoglotov inspires and unnerves in one hellish, experiential, holy manifestation. From the derelict night of Croyden, there is hope in synthtopia”. I’m really liking this track off his EP built around field recordings in East London during the 2012 Olympic games.

Matthew Pastkewicz – “If Peter Andre were (any more) skint and emotionally spent while writing ‘insania’ it may have sounded like this”. Listen to this live set for a Red Venice Records compilation.