You could say I’ve been on gig spree: in 9 days I’ve seen about 14 bands, varying from jazz to indie, from hip hopto folk, from garage rock to gypsy.

My spree kicked off with Fránçois & The Atlas Mountains. I had to battle the elements to get to this gig, but once inside the venue the atmosphere couldn’t have been in greater contrast with the miserable weather outside. Fránçois and his boys gave an ecstatic performance, including synchronized dance moves and lots of percussion. I was shocked they opened with my favorite song, but it turned out this was the tamest song in their set! I loved the support as well: Stranded Horse, a singer-songwriter who, rather than plucking on a guitar, plays the kora, a West African instrument.

A few of the other highlights: the Dino Plasmati/Carlo Fraccalvieri Open Quartet from Italy that played some wonderful jazz music during the opening of my little exhibition! As well as hearing folk-gypsy-jazz five piece Miss Maud’s Folly  play during a special evening – curated by oldest-record-store-in-the-world Spillers – in the Cardiff Museum, and seeing Quiet Marauder play their kettles, pots, pans, box filled with stones, guitars and melodica TWICE this week.

A Gay Guy And A Dog by Quiet Marauder
Then last Wednesday my favorite Canadian rapper Cadence Weapon was in town that evening supporting Japandroids. I met Cadence Weapon aka Rollie Pemberton a couple of years ago when I was living in Berlin and I was one of the five people who attended his poorly promoted gig in some dodgy club. After he’d finished his (awesome!) performance he shook the hands of all the five attendants. My boyfriend and I got chatting to him and took him to couple of bars in Kreuzberg and had a lovely evening. Much to my surprise he still recognized us after all these years, and we met again after the show for some drinks. We tried to get a nice picture of us, but this is the only decent one in which I look like an overly excited fan and totally uncool. Then again, that’s exactly what I am. 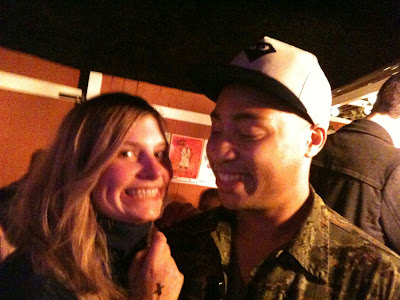 I love his unusual flow and his atypical choice of samples and beats, taking lots from electronic and dance music. For his latest record, Hope in Dirt City (to be released next week) he’s been working with friend and neighbour Grimes, so I’m expecting the hip hop boundaries to be pushed even further on this long player.