Less then a mile from where I live, on a rather leak strecht of Mare Street in East London, you will find the mysteriously named Last Tuesday Society, a fabulous curiosity museum and shop. Two floors are filled to the brim with stuffed animals, exotic objects like shrunken heads and other oddities (for example a turd in a jar, that supposedly was once in  Amy Winehouse’s colon). In the back of the shop is a small exhibition space where they host talks, seances and (mouse and hamster taxidermy) workshops.

Last Friday I had the pleasure attending the book launch of Walter Potter’s Curious World of Taxidermy there. It was splendid: there was free wine and a free lecture by the author Dr Pat Morrison on the self-taught Victorian taxidermist, who lived from 1835 till 1918. 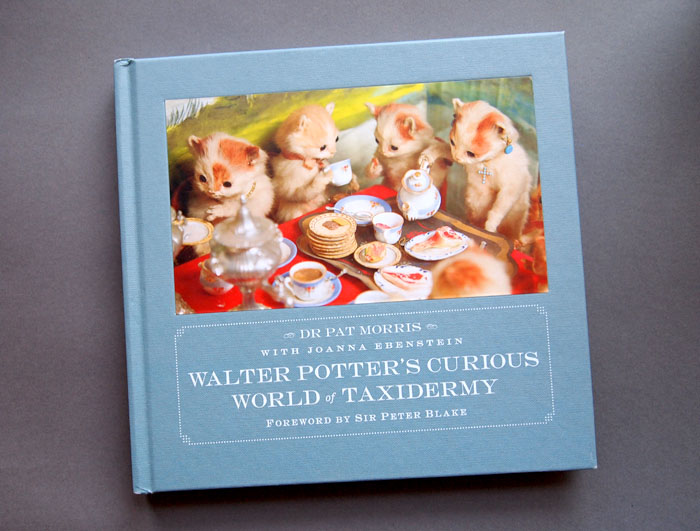 Walter Potter became famous for his anthropomorphic taxidermy: the stuffing of animals in poses as though they were human. He made some very elaborate tableaux of guinea pigs playing cricket, squirrels playing cards, kittens getting married, a guinea pig brass band, a bird’s funeral, baby rabbits attending school and of kittens having a tea party. 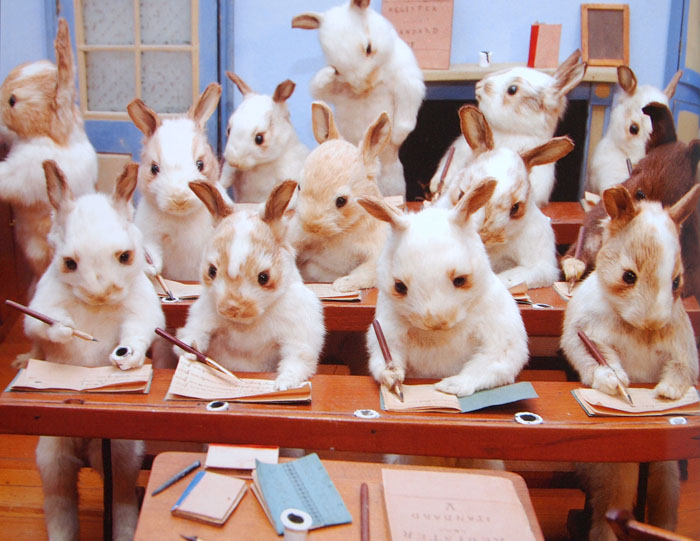 Morris started his own museum for his creations in his hometown of Bramber, West Sussex. Morris also stuffed ‘freaks of nature‘, like a three-legged piglet, a four-legged chicken and kittens with double heads. These animals would be donated to the museum by local farmers. 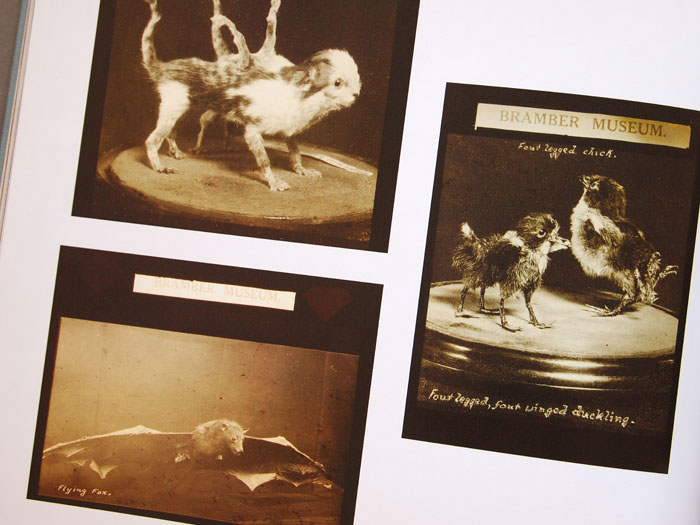 Even Morris’ own pets ended up in the museum after they’d died! Among these were his white cat, which was on show sporting a red bow tie. Birds were often brought in by visitors or local villagers who had found them; rabbits and kittens were sourced from breeding farms, where they were ‘excess’ (remember, this was almost 150 years ago).. 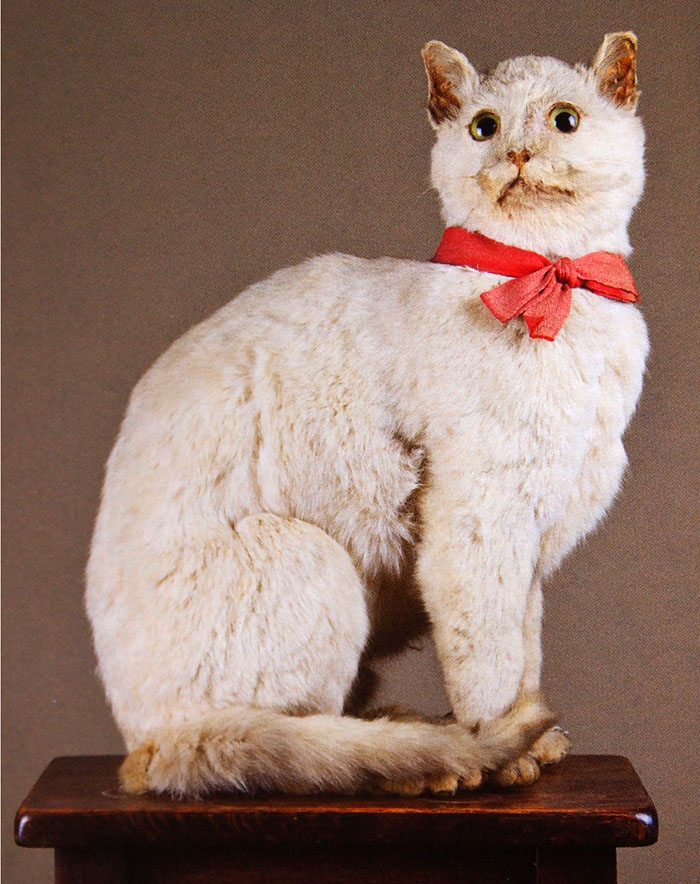 The museum attracted many visitors and remained open even after Morris’ death. His daughter and son-in-law and later their son ran the museum successfully, but after the son’s death his widow struggled and sold the house and the collection. It subsequently moved to Brighton, Arundel and finally Cornwall. In 2002 the collection was sold in individually pieces, despite a last-minute 1 million pound bid from Damiem Hirst to keep the collection together. Since then his pieces have dispersed all over the world and this book is now the only record of what the collection once was.

Characteristic of Morris’ work are the (often black) round eyes. I find it a real accomplishment that he managed to put so much character into his scenes and animals, despite minimal facial expressions. These are a few of my favourites:

∧ This is exactly how I read the newspaper in the morning, holding my spoon with cereal absentmindedly in mid air. 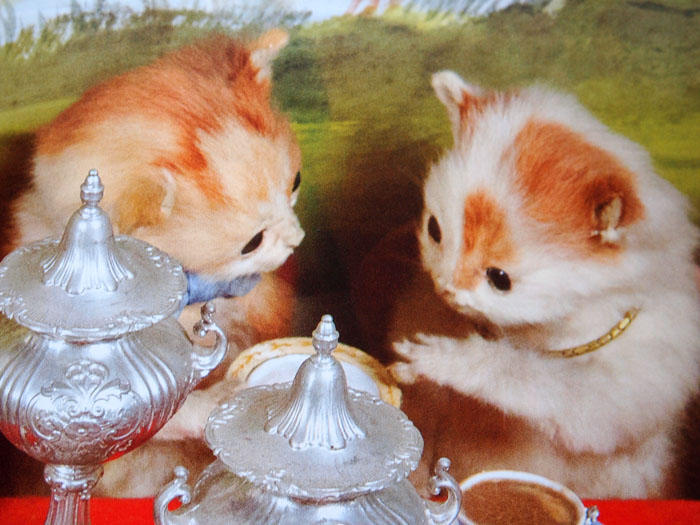 ∧  I look exactly like the kitten on the right when I’m heavily engaged in a conversation (explaining something, or yes possibly gossiping) over a cuppa tea! 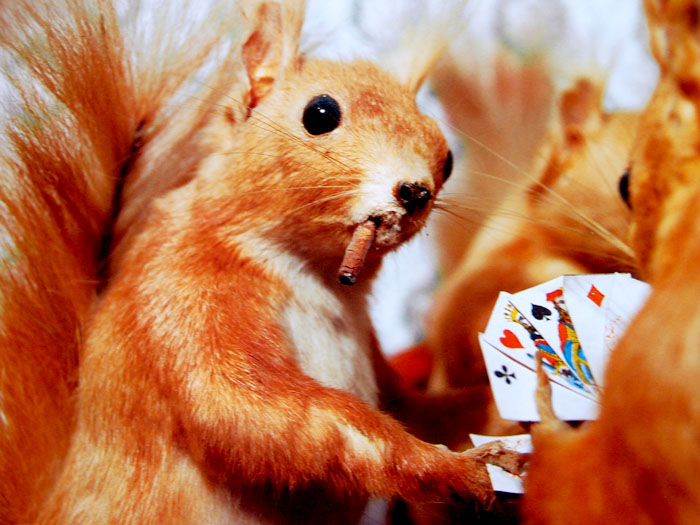 ∧ This is exactly what I look like when I play poker! Just kidding. But it is a rather intimidating squirrel isn’t it?!

All pictures above are from the book, which contains over a 100 full color images. Buy it a The Last Tuesday Society, or order it online here.

Finally, you can enjoy a mini-lecture by Dr Pat Morris yourself thanks to this short movie…