The Tomb of the Unknown Craftsman

As soon as I set foot on London soil this last Friday, I hurried myself to the British Museum for the Grayson Perry exhibition The Tomb of the Unknown Craftsman. What a joy it was!

Perry curated his own show, displaying new as well as older works next to artifacts that he had picked from the British Museum’s vast collection (it contains 8 million objects!). I know the man mainly for his ceramics: vases on which he makes beautiful drawings and collages. But I loved seeing works in other media here. I love the themes in his work like shrines, magic, maps, ‘scary figures’, gender, authenticity (“I love fakes for they make us think about what is is we see in the authentic“) and craftsmanship itself. I love how he draws from folklore and outsider art, and mixes tradition with the contemporary. I also love the fact that he talks about his art in a pretty straight forward, unpretentious way and the way he sees himself as an artist:

"Part of my role as an artist is similar to that of a shaman or witch doctor. I dress up, I tell stories, give things meaning and make them a bit more significant. Like religion this is not a rational process, I use my intuition (...)"

As you can tell by my multiple use of the word LOVE I really LOVED this show and I urge you to go and see it if you have the chance! It’s on until 19th February 2012. 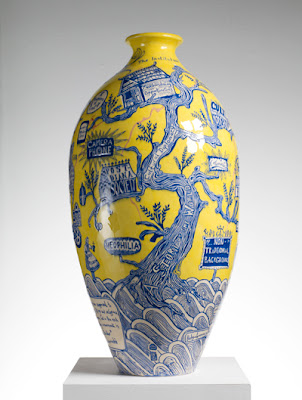 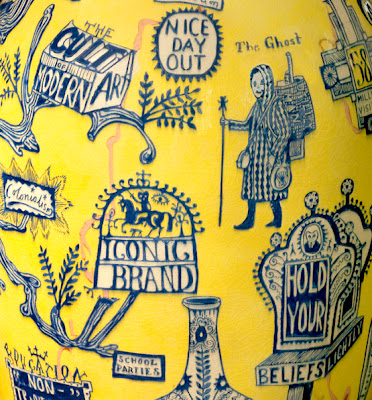 ∧ detail of  The Rosetta Vase. 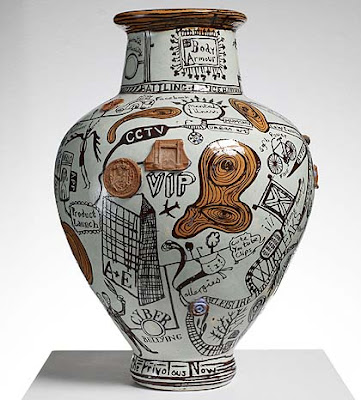 ∧ The Frivolous Now. He made the sketch for this vase the evening before decorating it by doodling away in front of the telly. 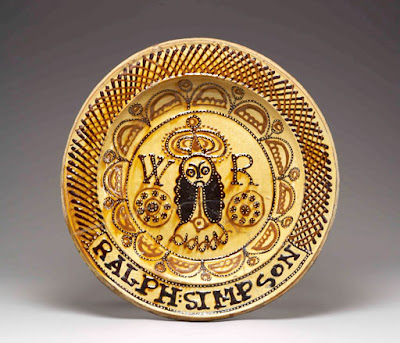 ∧ A dish from c. 1700 from the collection of the British Museum. You can see where he gets his mustard.

∧ One of the most impressive pieces was this immense tapestry (almost 3 x 7 meters), depicting religious and secular pilgrimage destinations. 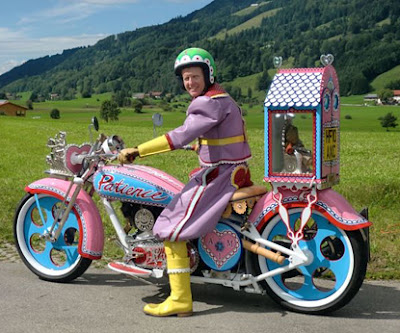 ∧ Perry went on a pilgrimage himself, to Germany, on this motor cycle, with on the back seat his 50-year-old teddybear Alan Measles (“the benign dictator of my childhood imaginary world”). 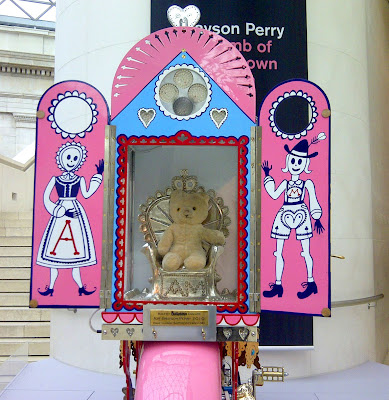 ∧ He made sort of a pope-mobile construction for Alan. The bike is on display at the British Museum, but the teddy is a replica. The real Alan is far too precious to be displayed! 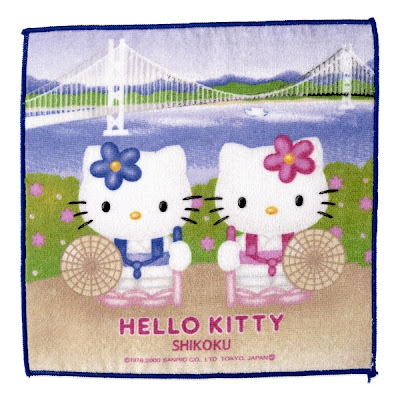 ∧ Inspired by pilgrimage tokens/souvenirs Perry designed one for his and Alan’s own pilgrimage. Several tokens were on display including this contemporary one from Japan:
"Perhaps more than any other object this hand towel embodies the spirit of this exhibition. It is fitting that it comes from Japan, a country that seems to have a remarkable ability to blend ancient traditions with modern technology and popular culture. Two Hello Kitty characters, created for merchandising in 1974, are dressed as traditional Japanese pilgrims (o-henro-san) in white robes, sticks and straw hats. This towel was sold as a souvenir on the island of Shikoku, famous for its 1200 km pilgrimage route taking in 88 Buddhist temples. So here we have an object featuring modern cartoon characters and a ritual dating back to the 18th century AD coming together on an object carried in most Japanese women's handbags."